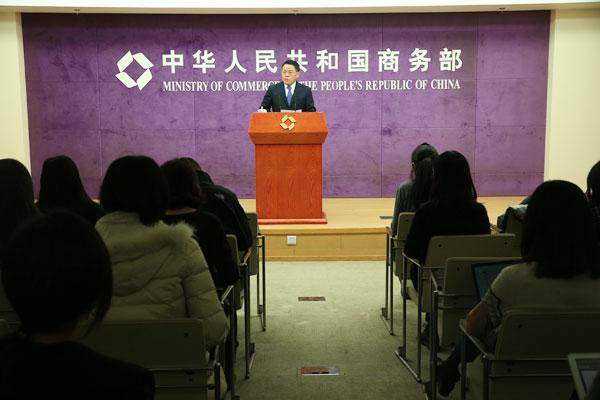 MOFCOM held a press conference on December 15. Spokesman Sun Jiwen released the business operation in January-November and that in November. Here are the records.

The characteristics of consumption markets in November are listed as below:

3. Sales of home appliance and communication equipment rose. Major manufacturers of home appliance promoted their products through e-commerce platforms while guiding consumers to interact with them in stores by channels of APP, We Chat Official Account and official online stores to provide good experience and jointly promote sales both online and offline. In November, sales of home appliance and communication equipment of enterprises above the designated size grew up 14.7% and 17.8% respectively year on year, with 6.8 and 6.1 percentage points higher than those in the previous months respectively.

4. Growth of farm products expanded. According to the monitoring by MOFCOM, the price index of national farm products in November grew up 1.7% month on month, up 3.7% year on year, 1.8 percentage points higher than that of last month, rising for three months in a row. The accumulative growth in January-November was 4.5%, equal to that in January-October, with 4.1 percentage points higher over the same period of last year. Since winter came, greenhouse vegetables have been the main source of vegetables. Moreover, affected by cold wave weather across the country, cost of production, storage and transport all increased, fresh vegetables saw seasonable rise. The average wholesale price of 30 kinds of vegetable monitored was RMB 4.45 per kilo, up 9.6% month on month, and up 17.4% year on year.

2. Export of high value added service accelerated. Exports of high value-added services grew rapidly, among which technical service, maintenance and repair service and advertising service stood out with a value of RMB61.6 billion, RMB27.7 billion and RMB25.5 billion respectively, up 14%, 67.5% and 63.4% respectively year on year.

China’s input of foreign investment in January-November has the following characteristics:

1. The national overall absorption of FDI was stable. In January-November, a total of 24,355 newly-established foreign-invested enterprises were approved, going up 3.0% year on year. The actually utilized FDI amounted to RMB731.8 billion (US$113.79 billion), up 3.9% year on year ( with data of bank, insurance and security excluded).

The actually utilized FDI in agriculture, forestry, husbandry and fishery amounted to RMB11.6 billion, up 32.9% year on year.

V. Relevant Situation of the Ministry of Commerce Being Going to Issue the Coordinated Development Plan of Commerce and Trade Logistics of Beijing, Tianjin and Hebei and The 13th Five-Year Plan of Development of Residents’ Living Service Industry with Relevant Departments in the Near Future

Ministry of Commerce will issue the Coordinated Development Plan of Commerce and Trade Logistics of Beijing, Tianjin and Hebei and the 13th Five-Year Plan of Development of Residents’ Living Service Industry with relevant departments in the near future. I will briefly introduce the relevant situation of these two plans.

Next, I will introduce The 13th Five-Year Plan of Development of Residents’ Living Service Industry.

Residents’ living service industry such as catering, accommodation and housekeeping is closely linked with people’s living. In recent years, the Ministry of Commerce, together with relevant departments, has vigorously promoted the rapid development of residents’ living industry, playing an important role in stabilizing growth, adjusting structure, benefiting people’s livelihood and promoting employment while constantly improving the service qualify for the great majority of the people. At the same time, we see that some existing problems such as insufficient amounts, non-excellent structure, low quality and overburden are waiting to be solved. In order to promote the continuous sound development of the residents’ living service industry, to promote better and more service for the people, the Ministry of Commerce compiles The 13th Five-Year Plan of Development of Residents’ Living Service Industry on the basis of deep researching and extensive suggestion soliciting.

The Plan focuses on three goals such as strengthening service capability, expanding the main market players and optimizing development environment. It defines six major tasks, namely, comprehensively improving supply capacity by taking structural reform of supply-side as the key, improving organizational degree guided by brief and intensive administration, improving innovation capability through informatization, improving service quality through the goal of standardization, expanding service space under the guidance of internationalization and improving development strength guaranteed by optimizing environment. At the same time, the Plan proposes many supporting measures, including implementing the act of reducing poverty by improving housekeeping capability, the project of promoting rural service consumption, the development and action plan of transformation of residents’ living service industry and building comprehensive living service center of community.

The full text of these two Plans will be published on the website of the Ministry of Commerce.

VI. Media to Pay Attention to China’s Investment in Africa since This Year

According to the prediction of African Development Bank, in 2016 the economy of Africa has increased 1.8%, marking the lowest number for almost 20 years. However, the overall economic situation of Africa doesn’t impede China’s rapid development step of investing in Africa. According to the statistics of the MOFCOM, in January-October, the non-financial direct investment flow of Chinese enterprises to Africa increased 31% greatly and the amount exceeded US$2.5 billion. Under the current complex and changing international economic situation, this performance is valuable, because it not only embodies firm confidence of Chinese enterprises in African market, but also indicates China’s strong risk-handling capability and development resilience in investment cooperation with Africa.

Under the guidance of the initiative of China-Africa Ten Cooperation Plans proposed by President Xi Jinping at the Johannesburg Summit of China-Africa Cooperation Forum in 2015, the investment of Chinese enterprises in Africa mainly showed three features. Firstly, the non-financial direct investment flow to countries such as Kenya and Uganda has fast economic growth increase by more than 100% year on year. Secondly, the first-stage construction of the expansion area of the trade and economic cooperation area of Egypt and Suez has been officially started and there have been more than 10 famous international enterprises expressing the interests of investing and staring business in the park. The platform role and leverage effects of trade and economic cooperation zones such as industrial parks and zones have further come out. Thirdly, the proportion of manufacturing industry exceeded 10%.

Next, Chinese government will continue to take the China-Africa “Ten Cooperation Plans” as the key, continue to unswervingly promote trade and economic cooperation between China and Africa, encourage and support strong and reputable Chinese enterprise to invest and start business in Africa as always, and constantly improve policy and information service. Meanwhile, we hope that Africa can provide favorable investment and business environment for Chinese enterprises.

VII. About the Negotiation of Regional Comprehensive Economic Partnership (RCEP)

The parties decided that the 17th round of negotiation will be held on February 7-Marth 3, 2017 in Kobe, Japan. China is willing to, on the basis of fully respecting the core status of ASEAN, make joint efforts with all the parties, so as to conclude the negotiation as soon as possible and reach reciprocal and win-win agreements early. At the same time, China has always been a positive impeller and participants of Asian-Pacific economic integration and economic globalization. China is open and inclusive to all the Free Trade Agreements within the region that conform to WTO rules.

VIII. About the 5th Meeting of China-Thailand Joint Commission on Trade, Investment, and Economic cooperation

Both China and Thailand agreed that, against the background that the current world economy witnessed a growing downward pressure and uncertainties increased, China and Thailand should further strengthen connections of economic development strategies and plans, so as to help the two countries’ the economic transformation and upgrading to realize common development. The two parties signed the Protocol for the Delay of the Five-Year Development Plan of China-Thailand Economic and Trade Cooperation and for the Formulation of Joint Action Plan., They also specified and confirmed the moves, major fields and bilateral economic and trade cooperation which will work as the specific measures in the docking of strategic plans.

(All information published in this website is authentic in Chinese. English is provided for reference only. )


(All information published on this website is authentic in Chinese. English is provided for reference only.)